Theodore Ahamefule Orji is a Nigerian politician and senator representing Abia Central Senatorial District. He was also a past governor of Abia state. Orji was born in his hometown Amaokwe-Ugba, Ibeku in Umuahia North Local Government Area of Abia State on November 11,1950. His father Chief Tom Orji Ikoro was a Warrant Chief during the colonial era.

Orji started his primary education at St. Michaels Catholic Primary School, Umuahia, Abia State, from there, he proceeded to Santa Crux Secondary School, Olokoro in the present-day Umuahia South LGA in Abia State, and then Holy Ghost College, Owerri where he obtained his WASC results.

Orji then moved west to the Unversity of Ibadan where he studied and obtained a Bachelor of Arts degree in English in 1977.

After completing his studies, Orji got enlisted, for the National Youth Corps Scheme, and was deployed to Sokoto State where he was posted to teach at Government Secondary School, Shinkafi, Isa Local Government Area of present-day Zamfara State.

On completion of the National Youth Service Corps Scheme in 1978, Orji began working as an Administrative Officer in the old Imo State civil service in December 1979. He subsequently served in various capacities in the Cabinet Office, Ministry of Lands and Survey, Ministry of Agriculture, and Imo State Government House.

When Abia State was created in 1991, Orji returned to Umuahia where he served in Government House, Umuahia, Bureau of Budget and Planning and Ministry of Agriculture. On March 1, 1996, Orji was seconded to the National Electoral Commission of Nigeria (NECON), now INEC, Abia State as Administrative Secretary and was later redeployed to Enugu State in 1997 where he supervised the elections that ushered in the democratic government in the state in 1999. Thereafter, he returned to Abia State as Principal Secretary, Government House, Umuahia and Chief of Staff to the Executive Governor.

In December 2006, Orji won the gubernatorial primaries of the Progressive Peoples Alliance (PPA) to contest the 2007 governorship elections in Abia State. On April 14, 2007, he resoundingly defeated his closest rival by over 200,000 votes to emerge Governor of Abia State. He thus made history as being the first Governor in the History of Nigeria to win his election while in detention. He was sworn in on Tuesday, May 29, 2007 as the 3rd Executive Governor of Abia, Gods Own State.

He was re-elected as Governor on April 26, 2011 on the platform of the Peoples Democratic Party.

Theodore Ahamefule Orji in April 11, 2015 won the Abia Central Senate election to represent the people of Abia Central Senatorial District in the Nigerian Senate, on he platform of the Peoples Democratic Party.

Chief T. A. Orji has been recognized and conferred with many traditional titles, including Ochendo Ibeku, Utuagbaigwe of Ngwaland, and Ohazurume of Abia South. He is married to Mercy Odochi Orji and they have five children

Senator Orji is a recipient of the national ward of the Commander of the Order of the Niger (CON).

No reviews yet for Theodore Orji 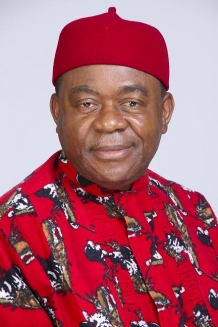