Senator Jibrin Barau was born on January 01, 1960 in Kabo Area of Kano State.  He represents Kano-North Senatorial District at the Natonal Assembly.

After his initial higher studies, the Senator worked briefly in the accounting department of the Kano State Foundation, before he resigned in 1992 to begin his private flourishing business with vast interests in the manufacturing, insurance and the construction sectors of the Nigerian economy. His success in the private sector prepared him adequately to begin a process of championing the cause of his people through the instrumentality of politics.

Barau contested in the elections of 1999 for the House of Representatives to represent Tarauni Federal Constituency of Kano State which he won.

After he completed his term at the House of Representatives, Barau returned back to private practice.

He was one time Commissioner of Science and Technology in Kano State.

He was appointed in 2001 to serve as a member of a committee set up by former President Olusegun Obasanjo to review the Nigeria's Budgetary process.

In 2009, he was appointed by the Kano State Government as a member of the Kano State Business Incentive Committee; a position in which he acquainted himself credibly.

On his return to electoral contest in 2015, Senator Barau contested and won election to the Senate of Federal Republic of Nigeria, representing Kano North Senatorial District on the platform of the All Progressives Congress.

At the Senate, Barau was appointed the Vice - Chairman Committee on Petroleum Resources (Downstream) of the Senate, and subsequently became the Chairman of the same Committee.

Barau is member of the Committee on Niger Delta, Industries, Land Transportation and Appropriations.

He is also the Secretary of Northern Senators Forum.

Senator Jibrin Barau, is a practicing Muslim and married and blessed with children.

Barau was recognised with award of "Northern Senator of the year, 2017" by Nigerian Senate Press Corps

No reviews yet for Jibrin Barau 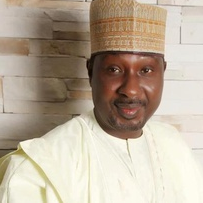