Senator Ovie Omo-Agege, was born on August 3, 1963, into Family of Justice James Omo-Agege of Orogun in Ughelli North Local Government Area of Delta State and Mrs Francesca Okwendo of the Wanogho Royal Family, also of Orogun. His father was a one time Chief Justice of Delta State. Ovie is currently the senator representing Delta Central senatorial district.

He showed early signs of rare leadership traits and abilities at St. George’s by his diligence, smartness, dignifying comportment and an attractive power of personal discipline, moral character and firmness on issues and with fellow students.

In 1985, he graduated with a degree in law from the University of Benin, Benin-City, and was called to the Nigerian Bar as a Solicitor and Advocate of the Supreme Court of Nigeria in 1986 after completing the professional training program at the Nigerian Law School, Victorial Island, Lagos.

In 2002, he obtained a Master of Law from the Tulane University Law School, New Orleans.

Upon completion of his National Youth Service Corps with the Directorate of Criminal Investigation and Intelligence of the Kwara State Command of the Nigerian Police Force in 1987, Omo-Agege legal career commenced in the firm of Pat Okupa and Co., where he cut his legal teeth as litigator in private practice over a wide-ranging areas of specialization as, criminal defense, corporate banking and commercial litigation. In all of these areas he acquired appreciable expertise and vast experience and in 1989, he moved to Lagos and co-founded Agege & Co, a private practice with emphasis on corporate banking and commercial litigation matters and became a principal partner.

In 1990, Omo-Agege moved to the United States of America and became a foreign associate in the Law Office of Charles o. Agege in Los Angeles, California, where he counseled foreign clients on Nigeria law and prepared litigation strategies and extensive motions and discovery in matters involving personal injury, breach of contract, fraud, securities, real estate, banking, letters of credit and other financial instruments.

In 1992, Ovie Omo-Agege was admitted into the State Bar of California, United States District Court (Central District of California) and the United States Supreme Court, Washington, DC. He founded Agege & Associates in 1992 and became the Senior Partner of the firm. By 1996, Agege & Associates merged into a partnership called Agege & Esin and extended its scope of activities to include international wire transfers, insurance, professional malpractice, suits against foreign entities under the Foreign Sovereign Immunity Act (FSIA) and Domestic International Commercial arbitration, admiralty and marine litigation practices, and extensive criminal defense litigation.

Omo Agege began his political career when he returned home from the United States of America and contested the People’s Democratic Party primaries of the Ughelli Federal Constituency for the House of Representative in 2002. Though he lost the primaries, he remained steadfast in his determination to contribute to the socio-economic development of his people. And in 2003, he was rewarded when he was appointed the first Executive Assistant to the Governor of Delta State, Chief James Onanefe Ibori, with responsibility for formulation, implementation, coordination of government policy, monitoring and appraisal of Executive Council decisions to ensure compliance with administration set goals, pre-qualification of and monitoring of state project vendors. He also acted as the Chief Liaison Officer, PDP National/Headquarters and Presidency relations, a position that enabled him to develop a network of contacts and friendship across Nigeria.

Two years later as a result of his sparkling performance, demonstrated leadership strength and proven ability to manage multiple responsibilities in fast-paced political environment Governor Ibori elevated him to the State Executive Council as Commissioner for Special Duties and gave him additional responsibility to oversee the privatization program of the state government. He successfully supervised the privatization of African Timber and Plywood in Sapele.

As Commissioner for Special Duties, Omo-Agege was credited with the development of a robust and dynamic policy in the area of conflict resolution. His unique ability to adapt to tricky situations manifested in the prompt release of hostages and recovery of large catches of small arms from youths involved in communal conflicts in the state. Also his proven ability to manage and complete projects to the highest standards ensured the successful completion of all projects of the Ibori administration.

In January 2007, Omo-Agege became the Secretary to the State Government (SSG), a position previously occupied by the newly elected governor. As SSG, Ovie brought an unusual dynamism and development stride to the affairs of Delta State. As Secretary to the State Government he strengthen the office of project monitors that still stands six years after he left office to ensure full execution of government projects.

During the 2015 elections, under the Labour Party, he contested and won the seat to represent Delta Central Senatorial District. His legislative interests include fostering a dynamic legislative oversight towards responsible governance and the protecting of the fundamental rights of every individual.

In recognition of his selfless service to humanity in general and the Urhobo nation in general, Omo-Agege was conferred with numerous traditional titles including the Ugo of Mosogar, Obarisi of Ughelli, Obarisi of Orogun, among others.

No reviews yet for Ovie Omo-Agege 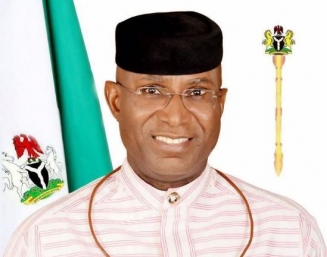