Victor Nosa Ikpeba was born on June 12th, 1973 in Benin City, Edo State, Nigeria. His father was from Isoko in Delta State, and his mother yoruba. He is a former Nigerian footballer who played as a forward for both club and country. Dubbed the 'Prince of Monaco' in his playing days, he played thirty-one international matches and scored seven goals for Nigeria.

Ikpeba is the first of three boys and lost his dad when was very young. Whenever he was on holidays, he visited his uncle, an Air Force officer, in Benin City. Between age four and five, he was already playing rubber balls in the neigbourhood with his friends. Ikpeba grew up with His fathers’s mother, who is from Benin City, in Sapele. He started schooling in Sapele, first at the Crowther Primary School and later at the Okpe Grammar School where he was a star member of the football teams. His fame went far and wide in the town, with everybody trooping to wherever he played, wanting to see the skinny left-footer who could do unspeakable things with the ball at his feet. He later moved to stay with his uncle in Lagos and then got an admission into Yaba College of Technology. He used the opportunity to play for Eko Holiday Inn, then they were in the LAFA League and Golden Eaglets. He was discovered by Belgian club R.F.C. de Liège during the 1989 FIFA U-17 World Championship, and moved to play in Belgium together with teammate Sunday Oliseh. After scoring 17 goals in 1992-93, Ikpeba was bought by French side AS Monaco where he gradually became a success, albeit with a tough start.

In 1993, Ikpeba was bought by French side AS Monaco then coached by Arsène Wenger. He showed outstanding form subsequent to the 1996 Olympics, scoring 13 league goals to help Monaco win the league title, and also finishing as the second-top goalscorer in the 1996/1997 UEFA Cup. His performances earned him the African Footballer of the Year award in 1997. Two successful seasons followed. While at Monaco, Ikpeba nearly signed for Italian club Reggina, but his wife, unwilling to give up life in France, locked him in their house on the day he was to sign his contract. Ikpeba played in Jean Tigana's talented Monaco side which famously put Manchester United out of the Champions League in 1998 on away goals after a 1–1 draw at Old Trafford.

Ikpeba teamed up with Sunday Oliseh at Borussia Dortmund in 1999, for a transfer fee of £4.8m. Ikpeba scored only two goals in his first season in the Bundesliga and barely played in his second, after falling out with the coach Matthias Sammer. Looking for a move abroad, Ikpeba turned down Southampton, to join Real Betis on a season-long loan. Things went further downhill for the player in Spain as he was criticised for being overweight by the coach, after making just one appearance for the club. He didn't feature for Betis again up until the last two games of the season.

Ikpeba then signed a season-long contract with Libyan Al-Ittihad, but only played out half of his contract with the club, as he quit the team over financial disagreements. After leaving Libya and spending almost a year without a club, Ikpeba returned to Belgium, where he joined his former Liège coach at Charleroi. After helping the club to avoid relegation, Ikpeba came very close to signing with the German Bundesliga side SC Freiburg, but the deal fell through when it was revealed that the player had no EU passport. Ikpeba then had a short spell at Al-Sadd in Qatar, before retiring from professional football.

Ater Ikpeba played for the Eaglets in 1989, he couldn’t play for the Flying Eagles in 1991 because Nigeria had issues with FIFA over age discrepancies of some players. However, Clemens Westerhof and Bonfrere Jo monitored him and he was eventually invited to the national team in 1991, just two years after he played for the U-17. Ikpeba made his debut for Nigeria in 1992. He played at the FIFA World Cups in 1994 and 1998. He also helped win the 1994 African Nations Cup and the Olympic football gold medal in 1996.

Ikpeba's wife Atinuke died in May 2000 at the age of 26, after losing her battle with breast cancer. She had three daughters for him. He currently has a Congolese-French lady, who has two daughters for him. After retirement, he has worked as a pundit with Brila FM and Super Sport. He has also been a columnist with FourFourTwo magazine.

During his playing days, Ikpeba won the 1993 Ebony Shoe Award and the African Footballer of the Year in 1997.

No reviews yet for Victor Ikpeba 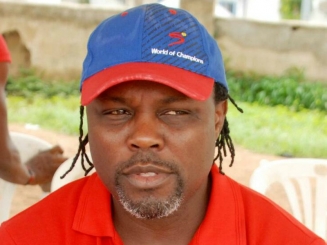