General Yakubu Dan-Yumma Gowon (popularly known as Jack Gowon) was born on October 19th, 1934 to Nde Yohanna and Matwok Kurnyang of Lur Village in Kanke Local Government Area of Plateau State, Nigeria. He was a former Nigerian military leader, who served as head of state from 1966 to 1975.

A member of the Ngas or Angas tribe, Gowon was the fifth of eleven children. H had his education in Zaria, Kaduna State, where his father an early Christian convert had moved to as a missionary of the Christian Missionary Society (CMS). While in school, Gowon participated in various extracurricular activities such as football, pole vault, athletics and boxing.

Gowon became a career army officer in 1954. He was trained in Ghana and in England at Sandhurst and twice served in the Congo region as part of Nigeria’s peacekeeping force there in the early 1960s. After the coup of January 1966, he was appointed chief of staff by Major General Johnson Aguiyi-Ironsi, the new leader. Northern officers staged a countercoup in July 1966, and Gowon emerged as the compromise head of the new government.

Gowon tried to resolve the ethnic tensions that threatened to fatally divide Nigeria. Although he was eventually successful in ending attacks against Igbo in the north, he was unable to affect a more lasting peace. In a final attempt to resolve the conflict, on May 27, 1967, Gowon declared a state of emergency and divided Nigeria’s four regions into 12 states. Three days later the Eastern region declared itself the independent state of Biafra with Odumegwu Ojukwu as its leader; armed conflict began in July.

Gowon directed government forces to remember that they were essentially fighting Nigerians, who were to be encouraged to rejoin the country. He also allowed a team of international observers to monitor the conduct of his troops. After the government victory in January 1970, a remarkable reconciliation took place between victors and vanquished, largely attributable to Gowon’s personal influence. By the mid-1970s Gowon was emerging as an international leader and was involved in the establishment of the Economic Community of West African States (ECOWAS). On July 29, 1975, however, while Gowon was in Uganda for an Organization of African Unity summit meeting, the army removed him from office.

Gowon was exiled to Great Britain. He was stripped of his rank for allegedly participating in the assassination of his successor, Murtala Mohammed, in 1976. He was pardoned by Shehu Shagari in 1981, and his rank was restored by Ibrahim Babangida in 1987. Having earned a Ph.D. at Warwick University in 1983, he became a professor of political science at the University of Jos in the mid-1980s and attained the status of an elder statesman of Nigerian politics.

Gowon returned to Nigeria in 1983 and in the 1990s founded a non-denominational religious group called Nigeria Prays. In 1992, he also founded a humanitarian organization, Yakubu Gowon Cntre. The organization is said to work on issues in Nigeria such as good governance, and disease (such as HIV/AIDS, guinea worm and malaria) control services. He also plays the role of an elder statesman in African politics, operating (for example) as an official observer at the 2008 Ghanian presidential elections.

General Gowon is married to Dr. Mrs. Victoria Gowon, a nurse by profession, and together they have two children, Ibrahim Bala and Saratu Kankemwa Tani Gowon.

No reviews yet for Yakubu Gowon 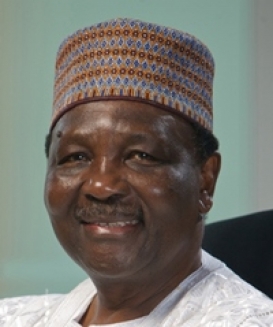