Biodun Christine Olujimi is a Senator of the Federal Republic of Nigeria, representing Ekiti South Senatorial District. She was born on December 25, 1958 to a Photographer father and Seamstress mother. She hails from Omuo-Ekiti in Ekiti East Local Government Area of Ekiti State Nigeria.

Biodun had her early education at our Lady of Apostles, Ibadan, Oyo State. She later obtained a Diploma in Journalism from the Nigerian Institute of Journalism and then went further to get a degree in Political Science and a Postgraduate Degree in Public Relations and Marketing from the University of Abuja. She also holds a certificate in IT with emphasis on Web Development from Michigan State University, USA.

Biodun got her first job at the young age of fourteen, a shop assistant in a fabric shop in Lagos. She started saving to return to school as well as assist her parents with the school bills for seven (7) siblings.

She later joined the Peoples Democratic Party (PDP) in 2002 and has attained great heights in her political career. She was appointed Special Assistant to the Executive Governor of Ekiti State in 2003 and was later elected to the Federal house of Assembly. In 2005, She became the Deputy Governor of Ekiti State under Governor Ayo Fayose. Following up on  this Mrs. Olujimi became Commissioner for Works and Infrastructure in Ekiti State under Governor Segun Oni as well as Director of Women Affairs, Goodluck-Sambo Campaign Organisation at the 2011 General Election.

Mrs. Biodun Christine Olujimi, was nominated onto the Board of the NCC by His Excellency Dr. Goodluck Ebele Jonathan in late 2011. She is widely credited for the original thinking, political courage, and relentless persistence in her drive to ensure Governance is cascaded to the grass-root.

In the 2015 elections, she contested for the Ekiti South Senatorial District and won on the platform of the Peoples Democratic Party.

Biodun and her husband Chief Ariyo Olujimi, have been married for 32 years and their marriage is blessed with Children and Grand-children.

No reviews yet for Biodun Olujimi 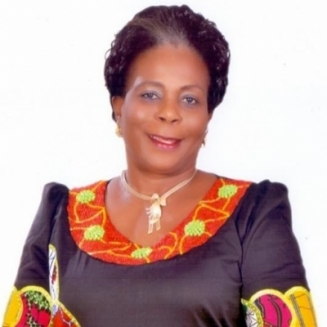