Senator Osinakachukwu Thankgod Ideozu was born on July 27, 1967 into the Ideozu Family of Ahoada Town in Ahoada East Local Government Area of Rivers State. He is currently a member of the Nigerian Senate where he represents Rivers West Senatorial District.

Ideozu began his early education at the St Paul’s State School completing his primary education in 1976. In 1982, he graduated from Western Ahoada County High School, Ahoada. upon completion of his secondary education travelled to the United Kingdom for further studies at the then famous St. Aldates College, Oxford. He however returned to Nigeria, and got admitted to the Rivers State University of Science & Technology, Port Harcourt where he studied Estate Management and graduated in 1989 with a First Class Honours Degree.

Ideozu holds three masters degree. On in Business Administration (MBA) Degree in Finance and Banking from the University of Port Harcourt, Rivers State. In 2008, he obatined another in Environmental Management from the Enugu State University (ESUT), and the third in 2010 from the University College of London, where he majored in Public Policy.

Due to his passion to serve his people, he got into politics and was first elected into the Rivers State House of Assembly, Port Harcourt in 1999 under the banner of the then All Peoples Party (APP) to represent the Ahoada East Constituency One where his dexterity stood him out and he became the Minority Whip of the then young Assembly.

In 2003, he contested and won the ticket to represent the People of the Abua/Odual and Ahoada East Federal Constituency at the Federal House of Representative under the umbrella of the Peoples Democratic Party (PDP).

Four years later, he returned to serve the People of Rivers State as the Honourable Commissioner for Finance where he elevated prudent spending of public fund to an unprecedented height.

In 2015, he got elected under the Peoples Democratic Party to represent Rivers West senatorial district at the senate in Abuja.

Senator Ideozu, a gentleman, a Justice of Peace, a lover of humanity, a philanthropist and good family man, exposed, composed and well travelled simply enjoys the search for knowledge and a relationship with very Noble Colleagues of the only Noble Profession in the world.

Senator Ideozu is a titled chief of the Ekpeye Ethnic nationality. He holds the title of Uli Ekpeye (The Voice of the Ekpeye People). He has won several awards and laurels including: 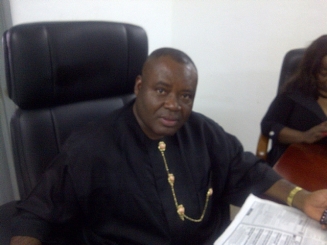