Emmanuel Bwacha was born on December 15, 1963 in Donga Local Government Area of Taraba State. He is an indigene of Taraba State and the Senator representing Taraba South Senatorial District.

Emmanuel  Bwacha has a Diploma in Public Administration obtained from the University of Calabar.

Prior to becoming a publicly elected officer, Emmanuel Bwacha was a public servant and served as Commissioner for Agriculture, Taraba State, between 1999 and 2003 during the Jolly Nyame administration.

Bwacha was elected to the Federal House of Representatives for the Donga / Ussa / Takum Constituency, serving from May 2003 to May 2007. He was also the Chairman of the House Committee on Police Affairs.

He successfully contested and won the election to represent Taraba South Senatorial Zone in the 2011 general elections using the Peoples Democratic Party(PDP) ticket.

In the 2015 elections, he contested again for the senate seat and was successfully re-elected still on the PDP platform.

He is the Deputy Minority Leader of the Senate.

Senator Emma Bwacha is a Christian and is happily married and blessed with children.

Senator Emmanuel Bwacha is a recipient of the National Honour of the Commander of the Order of the Niger (CON).

No reviews yet for Emmanuel Bwacha 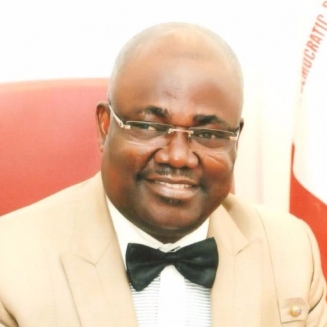