Chief Ernest Adegunle Oladeinde Shonekan was born in Lagos, Nigeria, on May 9th, 1936. His father was an Abeokuta-born civil servant and he was one of six children born into the family. A British trained lawyer, industrialist, politician and traditional chieftain, he served as Nigeria’s 9th president.

Shonekan attended C.M.S grammar school and Igbobi College both in Lagos. He also attended and received a law degree from the University of London after which he was called to bar.

After being called to bar, Shonekan worked as the chief executive of United African Company PLC (UAC). He was a seasoned and proven businessman with a wide network. Because of his proven abilities and political neutrality, then president Ibrahim Babangida liked him and made him a prospective leader for his council of civilians-run government, a government which was in the midst of economic turmoil and later came to a political crisis. He was Head of the Transitional Council of Babangida ‘s government in 1993.

On January 2nd, 1993, Shonekan assumed office as the head of government affairs under the leadership of the military president Babangida. At the time, the transitional council was designed to be the final phase leading to a scheduled hand over to an elected democratic leader.

On August 26th, 1993, Shonekan was appointed the interim president of Nigeria by General Ibrahim Babangida. Shonekan assumed office to meet the Nation gradually moving towards meeting a stalemate. He made attempts to have the Nations debt cancelled but after the annulment of June 12 election most of the western powers imposed economic sanctions on Nigeria. He tried to set things straight but he loosely controlled the military.

Shonekan only stayed in office for a transitional period of three months before his administration was toppled by General Sani Abacha who forcefully brought Nigeria back to military control on November 17th, 1993.

Shonekan is married to Margaret Shonekan and they have four children namely, Adeboye, Korede, Kemi and Yele. Since leaving government, he has taken the role of an elder statesman.

No reviews yet for Ernest Shonekan 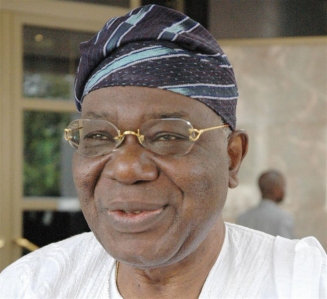