She attended the Ilora Baptist Grammar School, Ilora, Oyo State, for the early part of her secondary school education before transferring to Olivet Baptist High School, Oyo State after which she went to Kwara State College of Technology for her ‘A’ levels.

Sunmonu attended Holborn Law Tutors for her LL.B and then went on to the London School of Accountancy to complete a course to qualify for the Institute of Chartered Secretaries & Administrators. She later attended Lewisham College for her Business in Management Studies.

Monsurat briefly worked at the Accounts Department of the Property Development Corporation of Oyo state (now Housing Corporation) in Bodija Ibadan, Oyo State before travelling to the UK in 1979 to further her studies.

After completing her studies, she briefly worked at the National Westminster Bank (Natwest bank) before taking up employment with the British Government. There she worked in the United Kingdom Border Agency (UKBA), as a Detained Case Work Manager; a position she held for over 20 years.

While at the UKBA, she attended various managerial and executive courses and was one of the first Nigerians to be given “higher security clearance” in the British Government.

Sunmonu rose through the ranks to be a senior member of the British Government; before leaving honourably and graciously in 2011 to contest for a seat in the Oyo State House of Assembly, where she would go on to be Speaker.

Her philanthropic and kind nature led to her rise in Oyo State politics and she is widely known and highly regarded amongst the Nigerian community in the United Kingdom, where she was resident for over 30 years.?

As an indigene of Oyo town, Oyo State, on 26 April 2011 Monsurat Sunmonu contested on the platform of the now defunct Action Congress of Nigeria (ACN) for the Oyo East and Oyo West seat in the House of Assembly.

She convincingly won the election, winning all 20 available Wards in her constituency.

Monsurat Sunmonu was then nominated to be the Speaker of the House at its inauguration on 10 June 2011 she became the first female Speaker in the history of the Oyo State House of Assembly.

In May 2012, Sunmonu was voted as the Deputy-Chair of the Conference of Speakers of the Federal Republic of Nigeria, which consists of the 36 Speakers of each State in the Federation.

She was the first Speaker in Oyo State history to sit on the executive council of the Conference of Speakers.

On 28 March 2015, Sunmonu contested the Oyo Central Senatorial District seat on the platform of the All Progressive’s Congress (APC) and emerged the winner of the elections.

She is the first female Senator to represent Oyo State in the Upper Chambers of the National Assembly.

Senator Monsurat is married and blessed with children.

She is very philantropic and is the founder and owner of the MONSURAT OLAJUMOKE SUNMONU WORLD EMPOWERMENT FOUNDATION (MOSWEF) through which she provides community activities to socially elevate women and the less privileged.

No reviews yet for Monsurat Sunmonu 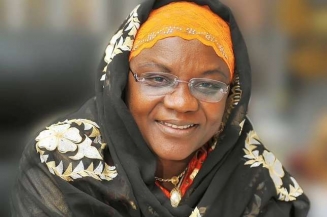