Abdulsalami Alhaji Abubakar on June 13th, 1942, in Minna, Niger State, Nigeria, to Abubakar Jibrin and Fatikande Mohammed. He is a retired Nigerian Army General who was Nigeria's last Military Head of State before transition to democracy in 1999.

A member of the Gwari ethnic group, he had his earlier education at the Native Authority Primary School in Minna from 1950 to 1956. Between 1957 and 1962, he attended the Provincial Secondary School, Bida. He also attended the Technical Institute, Kaduna. He enlisted first into the Airforce but quickly switched to the army. Besides other local training, he was in the United States between 1975 and 1977 on a training course.

In 1963, Abubakar joined the ranks of the newly sovereign nation's military forces as a candidate in the officer training program of the Nigerian Air Force. He trained at a flight school in Germany, was commissioned a second lieutenant in 1967, and served in Lebanon as part of a United Nations peace-keeping force. He commanded Nigeria’s contingent of United Nations peacekeeping troops in Lebanon in 1981. By the late 1980s he was a senior officer and reached the rank of major-general in 1991, Nigeria had been plagued by years of unrest, including a brutal civil war and a series of coups. In 1985 a bloodless coup placed Major-General Ibrahim Babangida in charge, who was both a personal friend and neighbor of Abubakar's. Babangida promised reform, but an even worse period of political repression began for the country. Finally, in the late spring of 1993 Babangida permitted elections, and a business leader named Moshood Abiola was believed to have won at the polls on June 12. However, Babangida's government refused to release the final tally, and courts beholden to Babangida annulled the elections. Rioting followed, and in November of 1993 General Sani Abacha, the country's defense minister, took control of the government.

Following the sudden death of Abacha in June 1998, Abubakar was sworn in as Nigeria’s head of state. Like many other Nigerian military leaders, he promised a return to civilian government, and founded the Independent National Electoral Commission (INEC), and the National Examination Council (NECO). Although Abubakar dissolved the political parties Abacha had established (Abacha had been a presidential candidate for every party), he did establish a plan for multiparty elections, and he set May 29, 1999, as the swearing-in date for the new civilian president. Confidence in Abubakar’s plan was strengthened when Nobel laureate Wole Soyinka returned home after four years in self-exile. As promised, presidential elections were held in January 1999, and Abubakar handed the government over to the winner, Obasanjo, on the promised date. He retired from the military and returned home to Minna.

Abubakar is married to Fati Lami, a former high court judge. They together havesix children among whom are Isa Abubakar and Fatima Abubakar. He is the author of the book Nigeria: A New Beginning, published in 1998.

No reviews yet for Abdulsalami Abubakar 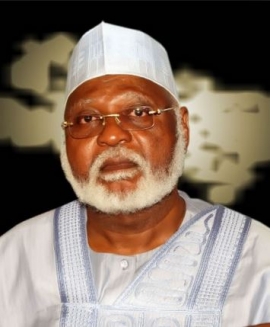