Princess Stella Oduah-Ogiemwonyi was born on January 5, 1962. to Igwe D.O. Oduah of Akili-Ozizor in Ogbaru L.G.A. of Anambra State. She is the senator representing Anambra North Senatorial District at the National Assembly.

Stella attended St. John's Primary School Atani, completing in 1974 and then proceeded to Zixton Secondary School where she obtained her WASC in 1978.

She thereafter attended St Paul's College in the United States and graduated with a Bachelors degree in Accounting in 1982.

There is a maze of controversy surrounding her claim to having obtained a Master of Business Administration degree at St Paul's College also.

Stella returned back to Nigeria in 1983, after her studies in the United States  and joined the Nigerian National Petroleum Corporation(NNPC).

She worked with the corporation for nine years and left in 1992 to establish her own company the Sea Petroleum & Gas Company Limited (SPG), an independent marketer of petroleum products in Nigeria.

Oduah was appointed and confirmed  Minister of Aviation on July 4, 2011. She was however relieved of her duties as Minister of Aviation on 12 February 2014 after almost three years in that capacity. This was as a result of her activity in the highly inflated purchase of BMW bullet-proof cars for the sum of $1.6 million. without following due process.

She was the campaign Director of Administration and Finance for former President Goodluck going into the 2015 elections.

Oduah contested for the senatorial seat of Anambra North Senatorial District in the 2015 election on the platform of the Peoples Democratic Party (PDP), and pulled a total 143 478 to defeat her main rival, Chief Dubem Obaze of All Progressive Grand Alliance (APGA) who got 70 900.

Senator Stella Oduah was married to the former Minister for Works, Engr. Chris Ogiemwonyi and they have children together.

No reviews yet for Stella Oduah 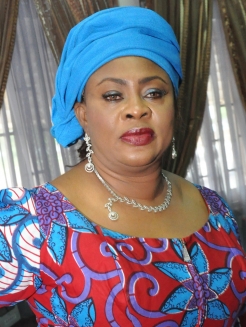