Akwa Ibom state is home to a number of indigenous cuisines which include the very popular Afang soup which is served with eba or fufu and a plethora of sea food which include oysters, periwinkles and crab. Important festivals held in Akwa Ibom state include the Atakpo, Ekong, Ekong Nkemba, Ekpe, Ekpiri Akata, Mfuuho, Ikon Ebre, New Yam, Obodom Eyong, Usoro Ekpo, Oko, Mbre Mmong, and Iso Awa- Itam festivals.

The Governor of Akwa Ibom State is Udom Emmanuel.

Akwa Ibom State is typically a water-bordered geographical entity considering its close proximity to the Atlantic ocean. The annual precipitation level is appreciably high at 4000mm per annum with the average temperature ranging between 24-25 degrees centigrade. The total area of Akwa Ibom State is estimated at 7,081 km squared with about 60 percent of this consisting of water.

The predominance of oceans and water bodies in Akwa Ibom State makes it ideal for fishing and quite a sizeable percentage of the State's population indulge in this either as a pasttime or as a means of livelihood. Farming is also a veritable source of income for inhabitants of Akwa Ibom State.

However, owing to the huge deposits of crude oil in Akwa Ibom State and the gargantuan scale of operations in the Oil sector within the state, the crude oil business is easily Akwa Ibom State's most viable economic activity providing employment opportunities to over 60 percent of the State's workforce with the prescence of several multinational oil companies adding to Akwa Ibom State's revenue. Other mineral resources found in Akwa Ibom state include limestone, clay, gold, salt, coal, silver nitrate, glass sand, silica sand, lignite, uranium, lead, and Zinc.

Akwa Ibom State was carved out of  Cross River State in 1987 by the administration of Gen Ibrahim Babangida with Tunde Ogbeha as the pioneer administrator of the State from 1987-1988. Former Governors of Akwa Ibom state include 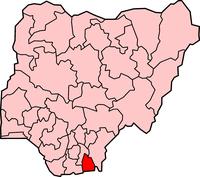 Find and explore some of the best businesses in Akwa Ibom State.